I am not a map maker.

I do find maps fascinating, but designing one that follows our understanding of how nature works can be difficult. I would probably pay for a service where you could press a button for a randomly generated world with weather, terrain, etc., but as far as I can tell, that does not exist.

There are several fantasy mapmaking apps out there. I use Wonderdraft. I like the style, and I like the fact it can generate an entire world that you can then fiddle with.

When I was creating maps for The Wellspring Dragons series, I already had my countries outlined, so I imported the borders and drew a continent around those. It worked great. For my Lapis of Nicodem serial, I had a few country names, but that was as far as I had gotten. So I kept generating landmasses until I arrived at one I wanted to use, saved it as a .png and imported it into Photoshop.

The problem, however, was drawing borders. I have an idea where mountains and rivers and the like go, what’s dry, what isn’t, but when I tried to freehand country borders, I hated what I produced. I pondered, I did a Google search and read posts about creating maps from various sources. While there are several explanations on how to use Photoshop’s cloud filter to create landmasses, I did not readily discover anything concerning map borders. I realized, though, that I could use the cloud filter to accomplish borders, just like how other map makers used it to create landmasses.

I opened my map and created a new layer. Then I rendered clouds. 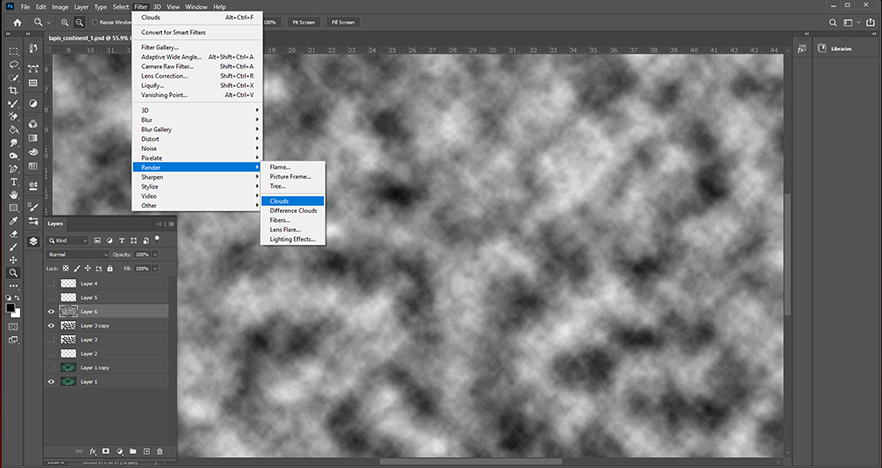 Then I used posterize on the clouds.

I made certain to turn posterize down until the image was black and white. 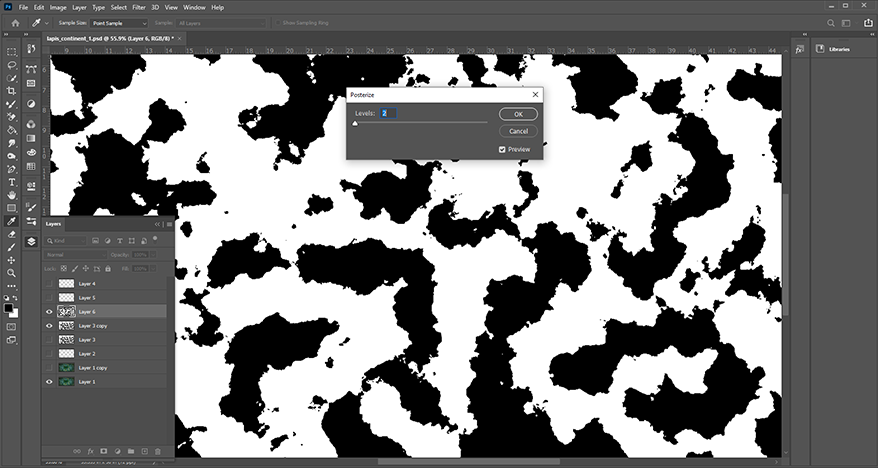 I then turned the opacity down to 25%.

Lines, for my borders! The lines were not where I wanted them, so I moved the cloud layer about until I had a good line, where I wanted it. Then I traced it on a separate layer.

I added more borders after moving the cloud layer. (Make certain you switch back to your tracing layer after the move, or you will not be a happy camper).

Here is a completed outline. I will do more work on the map until I have borders I like, so it’s not quite done yet. But it’s close.

The cloud-rendered borders are jagged enough they do a good job of representing actual country borders. I would also recommend looking at political maps from around the world. You can get a sense of the size of countries, and how oddly shaped many are.

While I did not include mountains or forests or cities or the like for this short tutorial (I wanted an uncluttered map), I would recommend placing them on the map before you start drawing borders. Many boundaries are mountain ranges or rivers or some other landscape feature. Use them to advantage (or have a reason why countries don’t line up that way. In my Wellspring Dragons series, many of the countries on the continent of Seari were originally broken up and re-created by Jonna Empire generals who were looking at ways to split native populations into different territories. They hoped this would quell rebellions. So the borders do not follow landmarks but cultures).